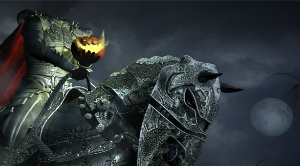 No.3 The Small Assassin

What’s a parent’s worst fear? An infant’s death. Ok, what’s the next worst fear. An infant assassin, of course. That’s the premise of Ray Bradbury’s short story, “The Small Assassin,” published in 1946. Naturally, the wife is the first to suspect her baby’s killer tendencies, and naturally her intuition gets pushed aside by the men in her life. Suspense and doubt are key elements of this story, which make it perfect for a read on Halloween night. An infant killer also made a great idea for a film starring an infant-size serial killer doll named Chucky.

What started as a pedagogic tool to show readers the writing/editing process in Stephen King’s memoir on writing, On Writing, ended up being one of the most terrifying films I’ve ever seen. In between it was a short story on the audiobook Blood and Smoke (1999) and in Everything’s Eventual (2002). Honestly, you’d be just as well to simply watch the 1408 film, but if you haven’t seen it, read the story first.

Just as Poe dealt with guilt in The Black Cat, King deals with the same theme here in his central character, Enslin. With the 1408 short story there’s a more definitive answer that the events actually happened than what we get in the film, which leaves us wondering if it was real or if the events were Enslin’s version of hell.

No.1 The Legend of Sleepy Hollow

Well, this might seem a tad obvious for a Number 1 entry on a list of short stories to read on Halloween, but could there have been any other? An apparition of a headless horseman and a smashed pumpkin; it doesn’t get any more Halloween than that. Although the ghost story is full of ghost stories, The Legend of Sleepy Hollow is really about winning the right to marry a woman and the evil lengths one might go to eliminate the competition.

If you’ve never heard of the Headless Horseman, Ichabod Crane, or Sleepy Hollow, you’ve never really celebrated Halloween. We kindly ask you to turn in your Monster Membership at the door.