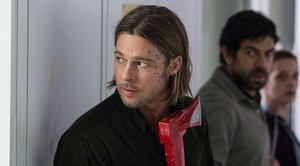 The sequel to World War Z is back on. During the difficult filming of World War Z, plans for a sequel were canceled, even if the intention to have a second film was always the intention for Brad Pitt and his Plan B production company. The news that there will be a sequel is really no surprise given that it was always the plan and the nearly $540 million world wide gross. To hell with any negative reviews! And who cares that, at $190 million, World War Z was one of the most expensive films ever made.

Very little is known about the sequel, but Pitt has stated:

We are talking about it. We are going to investigate a script. We have a lot of ideas we will cull from. Nobody is writing just yet, but we are compiling our ideas.

Although the details regarding the future of World War Z‘ sequel are unknown, even to the developers, it is known that Marc Forster won’t be sitting in the director’s chair this time around

Keep it locked to Yell! Magazine and we’ll keep you posted as this story develops.