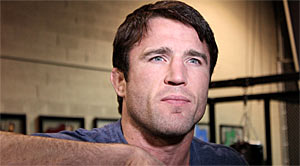 Although one of judges called a draw in the Floyd Mayweather fight over the weekend at the MGM Grand Hotel & Casino, Las Vegas, Nevada, the majority in a sold out crowd of 16,746 clearly saw a domination on Saúl Alvarez. The most clueless boxing fan could have easily scored the fight better. CJ Ross’ scorecard is as shocking as Chael Sonnen‘s recent jab at the WBA (Super) Light Middleweight Champion and WBC & The Ring Light Middleweight Champion.

Look, Floyd (Mayweather) needs to keep doing what he’s doing, which is fighting complete tomato cans that we’ve never heard of before. I’ve never seen anybody in the history of America get so rich and so famous off of having complete wimps throwing punch at their faces. I know what you’re saying. You’re saying, ‘Well, it’s happened before, what about Rihanna?’ … Too soon? Was it too soon?

Fortunately, CJ Ross stepped down from her job scoring pro boxing matches, and Sonnen’s hosting job on Fox Sports Live will remain unaffected by his poor remark. However, Fox Sports regrets he made the comment and apologized for it in the following statement.

FOX Sports regrets the comments Chael Sonnen made during last night’s edition of FOX Sports Live. They were an inappropriate attempt at humor that Sonnen acknowledges shouldn’t have been made and he apologizes to anyone who may have been offended by his remarks.

Do you think Sonnen took it too far now? Drop your say in the comments section below.