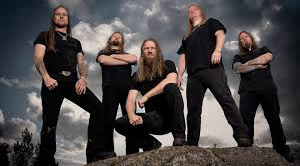 I really wanted to put up a Twisted Sister concert this week (man do I love that shit). Ultimately, however, I thought it would be more practical to put up an Amon Amarth concert since we’ve been talking a lot about them in the last few weeks because of their mini-doc Forging Mjölnir and soon-to-be-released album Deceiver of the Gods.

Deceiver of the Gods will be Amon Amarth’s ninth studio album, their first since 2011’s Surtur Rising. From what band member’s have said, the new album doesn’t hold back, featuring a more honest and raw version of the band with less internal criticism and editing. To date, however, what Amon Amarth have presented is nothing short of impeccable: their music is melodic, tough, entertaining, and just plain awesome.

As any fan knows, Amon Amarth is the Sindarin name of Tolkien’s Mount Doom, and the band sings about vikings and Norse mythology. Their style falls into the Melodic Death Metal genre, but there are many who like to call it Viking Metal or Viking Death. As such, can’t you just imagine LARPers playing Amon at an after party? To that end, why wasn’t Amon Amarth on the Thor soundtrack?