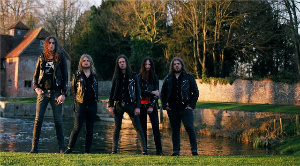 In Solitude will be returning to North America this fall with Watain and Tribulation! This will be In Solitude’s first North American tour since the Decibel Magazine tour in 2012, which also happened to feature Watain. The tour, which runs from October 8th through November 3rd, will be in support of In Solitude’s upcoming album, Sister. The album is set for release to coincide with the dates and In Solitude fans will be able to find new music streaming at metalblade.com/insolitude within the next few weeks. Updates, including new music, album art, and pre-order bundles will be posted as they are made available.

“We are tremendously enthusiastic to announce that In Solitude are coming back to America and Canada in October. We are especially delighted to do this in the company of our great companions of Watain and Tribulation. It is our great pleasure to take part in this grand malady. We can’t wait to arrive and let it steal another sky from our eyes. See you in October.”

“Starting the first full tour for The Wild Hunt in North America seems quite appropriate, considering how many severe experiences and sleepless nights that country has bestowed upon us while riding through its strange wilderness…A thousand years and a thousand deaths have passed since we last visited the States, so prepare yourself to face something very, very old and very, very hungry. Deformed from both victory and defeat, distorted by a constant influx of powers residing beyond the borders of this world, we now return to join forces with our ever loyal U.S. supporters. With us we will have two acts that have the capacity of transforming the audience into one big open wound before we go on stage, ready then to receive the lethal yet illuminating venom of WATAIN.”

In Solitude’s previous album, The World.The Flesh.The Devil, stands as one of the most critically acclaimed releases of 2011. Decibel Magazine ranked the album No. 4 on its top 40 extreme albums of 2011, while Terrorizer declared: “It is rare to hear heavy metal music crafted with such emotion, focus, passion, and sincerity.”