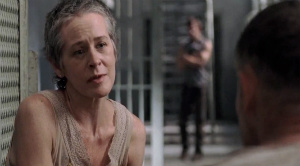 While we’re all in limbo, waiting for Season 4 of The Walking Dead to kick off in October, Anchor Bay is gearing up to release The Walking Dead: The Complete Third Season on Blu-ray and DVD. Heading for your undead hands on August 27th, the five-disc set comes loaded with bonus features, including exclusive behind-the-scenes footage, never-before-seen featurettes, audio commentaries from cast and crew, deleted scenes, and more.

One of the deleted scenes, seen here, was recently made available. In it, Carol shows kindness to Merle, and then subtly threatens him with a severe warning not to fuck up. I’m not sure I understand why they decided to delete this scene, as it is a powerful one and kinda makes me like Carol more. The one thing I can think of for its omission is that it paints Carol in a negative light. Apart from the scene being slightly outside the bounds of her character, it shows her as passive aggressive, where she is more of a nurturing woman (even if she’s grown and evolved exponentially since the first season).

Watch the scene and let us know what you think.

For more information on The Walking Dead: The Complete Third Season, please check out our previous article about the glorious box set. And don’t forget to watch The Walking Dead, Season 4 this October.