Scarface Remake: Are You Ready For It To Be Harry Potter-ized? 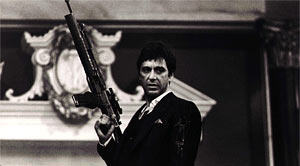 Ouch! Just the title alone of this update has to hurt. It’s no wonder Universal has kept a new Scarface remake a secret for so long; fans of the 1932 original and the 1983 remake by Brian DePalma will bury those f**king cockroaches.

I might sound a little harsh, but Scarface is a movie to be reckoned with since both versions are already perfect. I just can’t imagine another Scarface remake, like who can possibly out do Al Pacino’s performance as Tony Montana? Nobody! Period! If they even consider Javier Bardem for the role, no matter how great he is, I’ll personally send the studio death threats to stop this nonsense.

But before I jump the gun, Universal is first eyeing a director to helm this unwise Scarface remake and they already have someone in mind to do it, according to Deadline:

“Universal has been through a couple of drafts and now is very high on the current draft. The first stop is the director. This is before any conversations on talent or timing.”

David Yates, the director of the final four Harry Potter films is being consider at the moment. Yates is currently shooting St. Nazaire, a war drama about the British raid on Saint Nazaire in 1942. There’s also a draft of a script hovering around, but details about it are unknown. Apparently, it’s going to be a “fresh” take on the original Scarface, just like DePalma’s version was.

As soon as Universal locks in a director for the new Scarface remake, we’ll make sure to keep you in the loop on Yell! Magazine.