iwrestledabearonce – Late For Nothing Streaming In Entirety 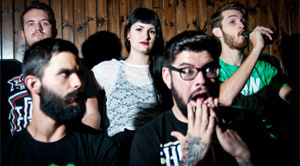 Experimental metal band iwrestledabearonce is currently streaming all 11 tracks of their new album, Late For Nothing, at Loudwire.com. The band’s third full-length album, first with vocalist Courtney LaPlante, is scheduled for release on August 6th via Century Media and is available for pre-order now in a variety of packages and formats at www.iwabostore.com and digitally at iTunes and Amazon.com.

After months of anticipation, IWABO is finally ready to release one of this summer’s most buzzed about metal albums. The avant-garde band, known for brewing an insane concoction of metal with elements of jazz, progressive metal, electro, and hardcore, has transcended previous efforts on Late For Nothing. With Courtney LaPlante the band has emerged with a new sense of maturity in their songwriting and song-structure that further establishes them as one of the most creative forces in heavy music.

Late For Nothing features 11 crushing tracks that arrive like a deranged beast, claws out, thrashing and tearing its way through 36-plus minutes of sheer madness with songs like “Carnage Asada” (featuring Steve Vai), “Firebees,” “Thunder Chunky,” and “I’d Buy That For A Dollar.” Prepare yourself!

IWABO is currently trekking across the U.S. on The All Stars Tour 2013 with Every Time I Die, Chelsea Grin, Veil of Maya, Terror, and more.