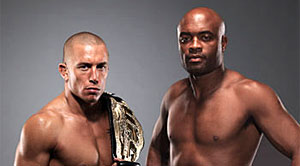 There’s just no getting around it! Anderson Silva‘s loss at UFC 162 is always creeping up somewhere and somehow. Even UFC Welterweight Champion Georges St-Pierre still can’t duck superfight questions no matter how great he is inside the Octagon. Of course, these nagging questions between the two best in combat sport won’t ever disappear until the imaginable happens, but since GSP made it clear that he doesn’t want to fight Silva, these questions will always remain as afterthoughts regardless if he likes to deal with them or not.

Surprisingly, in a recent media gathering for UFC 167: St-Pierre vs. Hendricks at the MGM Grand Garden Arena, GSP made a conversation change about Silva. According to MMA Fighting, GSP expressed how sad he was for Silva when he lost the middleweight strap to now champion Chris Weidman, and that it was a wake-up call for him.

“This thing happened, and it shakes you up a little bit and makes you [think], ‘Shoot, this thing can happen to me,'” St-Pierre continued. “But I don’t want it to happen to me, so I’m going to work hard.”

In addition, GSP also said that Silva is a “genius” no matter how dangerous his own tactics are inside the Octagon, and still believes that Silva is the “best in the world.”

“Anderson Silva is a genius. He wants, during the fight, you to think that you don’t even belong in the ring with him, because he’s too good for you. That’s what he wants his opponent to think. He’s a genius,” St-Pierre repeated.

“Look at that fight with Weidman. He did a lot of crazy things, but he didn’t land one significant strike on Chris Weidman. He landed some good leg kicks, but he didn’t land a significant strike that really hurt Weidman. But because of this game, he made it look like he was dominating the fight. It’s an illusion that he creates, which is very smart, because he can get into his opponent’s mind. Chris did very well. He stayed focused. At one point I was afraid that he was starting to believe the hype, but he stayed focused and he did well. Obviously, Anderson, he got caught. But I still believe that Anderson Silva is the best in the world. That’s what I believe.”

On those final words, expect to see GSP focused as usual when he squares off against UFC No.1 welterweight contender Johny Hendricks on November 16, 2013, in Las Vegas, Nevada.