Serianna Takes On Bullies In “Exist To Outlive” [VIDEO] 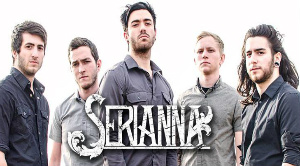 Serianna just released their brand-spanking new video for “Exist to Outlive” today. As with most songs, the meaning is open to interpretation, but my take here is that the band is addressing the very serious issue of being bullied and what it can lead to. Too many bullied kids these days are taking their own lives, and major credit goes to Serianna for tackling the issue and sending a positive message to kids: “this life is a precious gift, don’t take it away.”

I’ve been reluctant to write anything about Serianna, mostly because I can’t stand their cover of Eminem’s “Lose Yourself.” Being from Wisconsin myself, I wish I could give this band more support. So, thank you, Serianna, for finally giving me a reason to get behind you.

Serianna’s upcoming album, Define Me, produced by Josh Schroeder (For Today, The Color Morale), will be released on August 13, 2013. To promote the album, Serianna will kick off a U.S. tour with In Dying Arms on August 6th (see dates below).

About the “Exist to Outlive” video:

Guitarist and songwriter Kris Meyer-Ruef checked in about the video:

“Working with Sam Link on this video was great, he’s always done amazing work for us. This is a fresh face and a fresh start for us and we couldn’t wait to share our new music and our new energy with everyone!”

“The Inheritors record was almost three years in the making by the time we had the pleasure of releasing it on Bullet Tooth. It seems only natural that at least four years since the birth of that record, Serianna is due for serious growth. Over the past year, we have gone through a major line up change and thought hard about the future of our band. It was pretty apparent to any fan of our band before that we were heavily rooted in metalcore, influenced by the bands that could riff the tightest and fastest. We operated like a well-oiled machine, tight and uniform. But that was just the problem: we operated like a machine. This new record has given us all the opportunity to pour our hearts into our music in a way that we felt was impossible before. Every one of us has a voice, and you will hear that through every song on this record. We went heavier, groovier, darker, and more honest. I know deep down that kids are still looking for something real to fall in love with. We genuinely believe these songs are just that.”

“I’m so excited for the world to hear this album because every song has a catchy hook that will get stuck in your head. That has always been a huge selling point for me with the music that I listen to, and I feel that it is such an important element to have in song writing. We wanted to write an album that would not only be fun to listen to, but also be a great experience to see live. You can bounce up and down to just about every song on the record. Each one of us played a role in writing lyrics, pulling influence from past experiences. You’ll be able to relate to these lyrics in one way or another. I couldn’t be more proud of how this album came together.”