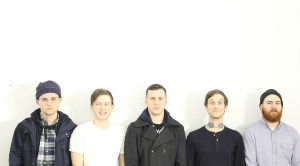 On July 23rd, Drug Church dropped their debut album, Paul Walker, and it hits like an atomic bomb. The post-hardcore punkers coming out of Albany, New York, cite Seaweed, Quicksand, Helmet, Jawbreaker as influences, which should give you an idea of their sound. At the same time, however, I can hear some Sonic Youth and a little Fugazi in their music as well (I tend to hear Fugazi in a lot of shit). Whatever you hear in Drug Church, I think you’ll find them addictive.

Paul Walker is currently streaming in its entirety over at AltPress.com, and you need to check it out — then buy it. Why? Because it’s honest, it sounds amazing, it’s simple, and it’s straight forward. It’s also about your life, especially with song titles like “Reading YouTube Comments.” Who doesn’t do that? The band has described their music as something “you can push-pit and stage-dive to so you can forget for a moment that you have eczema and work at Pizza Hut.” Yeah, I worked in plenty of pizza joints and can definitely attest that these are the sort of jams we rocked after closing.

Drug Church will hit the tour road in September with Raindance and In Between.