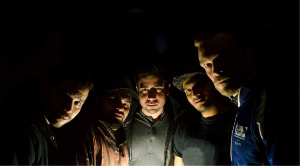 New Jersey’s progressive metallers, Gyre, are giving the Garden State something to rave about. The band’s second EP, Second Circle, was released today via Monolithic.

Though their being called a progressive metal band, I think they lean a bit more toward the tech death side of things. Nonetheless, the sound on Second Circle is powerful and brutal. The four-track EP is also a bit of a concept recording, inspired by T.S. Eliot’s poem, “The Wasteland.” As such, the songs deal with feelings of all-destructiveness, delusion, disdain, and the understanding that we must consume to produce.

Gyre recorded the EP with Kevin Antressian at Backroom Studios (Dillinger Escape Plan, The Number 12 Looks Like You, Adrenaline Mob, Foxy Shazam), and the young band is enthusiastically appreciate to everyone involved:

“Everyone in Gyre is so excited to finally release our second EP Second Circle through Monolithic Records. The music on the EP is a testament to five guys’ year worth of frustration, learning, adapting and, ultimately, enjoyment, and creation.

We are so grateful to everyone at themonolith.com for believing in us and showing us the support we were always looking for. We appreciate all the kind words we have received so far: from writers to people at shows to family and friends. The positivity makes us want to create more and more.

We understand that no band is an island. This band’s journey off our little island has just begun. Our musical tentacle web is now in the weaving.”

Gyre will continue to play live throughout the Northeast in support of the new EP, but for now, check out the list of dates: