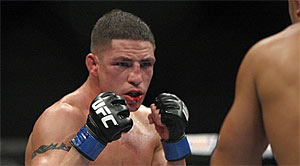 Dirty Sanchez, or I mean Diego Sanchez pulled a fast one on teammate Georges St-Pierre via Twitter the other day. The former King of the Cage Welterweight Champion is rooting against St-Pierre in his upcoming title defence with UFC No.1 welterweight contender Johny Hendricks.

Greg Jackson is Sanchez’ longtime trainer in MMA, but it doesn’t sound like he considers GSP a teammate one single bit in a recent tweet. Georges’ Head Trainer is Firas Zahabi of Tristar gym, and occasionally trained by Jackson as well.

Additionally, he also responded to a fan who called him out on the backstab move, and Sanchez wrote “if you call 3 one week visits in 6 years often. I dont!”.