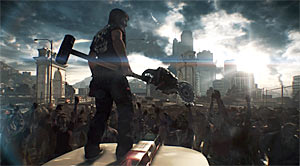 Dead Rising 3 is all about improvisational gameplay. Do what you want and play how you want is how the creators best describe the third installment. You can put on a Banana-Hammock and decapitate zombies online with a buddy. That’s how fun this upcoming game really is.

Based on what you see in the new gameplay trailer for Dead Rising 3, it isn’t far-fetched to say the series has gone all wild and wacky like the Saints Row series. It’s pretty cool how far the developers at Capcom Vancouver have pushed this open world survival horror to the next level. It’s packed with a bunch of new features, listed below. Only thing that sucks right now is that the series has returned as an exclusive launch title for Microsoft.

Dead Rising 3 is expected to be released in November for the Xbox One.

A bigger open world than ever before in the Dead Rising series–bigger than the worlds of DR 1 and 2 combined. The Xbox One hardware will also allow for a more seamless experience, with fast load times and awesome next-gen visuals.

Also expect lots more zombies on screen at a time, with vastly improved AI. You’ll have to be creative to stay alive here.

Hundreds of weapons scattered throughout the world and a nearly limitless variety of combo weapons. Combine weapons anywhere at any time!

Vehicles also play a much bigger role than ever before, but you’ll still be vulnerable to the zombie threat when you’re behind the wheel.

Easy to play, hard to master.

The accessible pick-up-and-play joy of a DR game, with a new save system and ability to explore the world without time constraints.

BUT! At the same time, you longtime DR folks will enjoy Nightmare Mode, which will bring us a return to classic DR rules, complete with countdown clock and other restrictions. More on Nightmare Mode to come, guys.

Play with a buddy over Xbox Live, with drop-in, drop-out play.

Use SmartGlass integration to turn your smartphone or tablet into a “Zombie Defense and Control PDA.” Overwhelmed by the zombie masses? Use the device to call an airstrike and even the odds. The PDA will also give you live missing briefings and in-game calls, and keep track of your mission progress. It even has a map to help you find hidden items and locations of interest, plus a real-time news ticker to keep you aware of conditions around Los Perdidos.The Kinect, meanwhile, will let you use noise to distract zombies and use motion controls to fight your way out of close encounters.