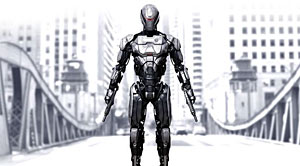 It’s finally Friday, which means the remake of RoboCop will be presented at the San Diego Comic-Con today. Ahead of the presentation, the RoboCop viral website that launched last year has recently been redesigned with a fresh look at some of OmniCorp’s “ultimate line of defense products,” such as the new ED-209 (Battlefield Control), EM-208 (Order Restored), and XT-908 (Aerial Vigilance).

Two new additions have also been made, a hand cannon with detailed specs was added (it looks very similar to RoboCop’s original Auto-9 gun — possibly an upgrade of this), and a motorcycle labeled as “C-1 Tactical Speed.” We have actually seen the C-1 in action on the set of RoboCop, which demonstrated the versatility of the new suit for RoboCop. Plus, looking at the website, it appears that ED-209 got a new paint job.

Lastly, since we haven’t heard much about the film, star Joel Kinnaman recently spoke about his experience on the making of the remake in an interview, and that it will “surprise people.”

“It was a great experience. Half of my scenes were with Gary Oldman, which was a dream come true. The director didn’t want to make a superhero movie –- we made an action tragedy. It’s going to be a sad and exciting story with quite a bit of drama… The movie will surprise people.”

RoboCop is currently slated for February 7, 2014.