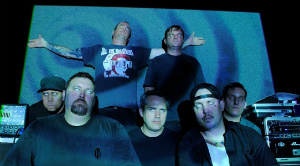 While Kill the Precedent streams “Goodbye Lullaby” over at Artist Direct, we love the convergence of horror and heavy metal. It’s not pure metal, however, as there are elements of hardcore, hip-hop, and electronic, but it is hard and full of energy.

In fact, Kill the Precedent are praised for their “abrasive, aggressive rock synchronized to visually transfixing slide shows.”

“This is a song that was put on the back burner until right before this recording. We wanted this track to sound as enormous as we could make it. So, with the late addition of constant driving dual vocals and some harmonizing guitars, we were able to fill some voids the track had in the past… Lyrically, it’s very busy but that’s because we had a lot of points to make in a very short period of time. Interpret them however you see fit, but basically it’s about good and bad times spent with old friends.”

In addition to checking out the stream of “Goodbye Lullaby,” try “Free Reign (Everybody’s Dead),” seen at the top. The video has some killer movie clips, dancing girls, and grooves reminiscent of RHCP, Rob Zombie, and Ministry (as one poster on the video comments).

The band are set to release Dialogues From The Dead on August 27th via Minus Head Record. The self-produced album was recorded at Pus Cavern, mixed by Joseph Johston (Cake, Deftones) and mastered by Logan Mader (Gojira, Fear Factory).

Kill The Precedent have a handful of local dates confirmed throughout the summer including a free Friday evening show at Cesar Chavez Plaza in Sacramento.