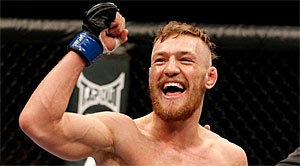 From the look of the video, both men are cruising around Las Vegas, Nevada enjoying a moment without punching someone in the face, or on White’s part, not screaming at the media because of stupid questions.

The video was published on YouTube earlier today, but according to White’s Twitter they were celebrating McGregor’s birthday. He turned 25 on July 14th.

Having dinner and hangin with my man @TheNotoriousMMA for his B Day!!! pic.twitter.com/W5BGpzvsUE