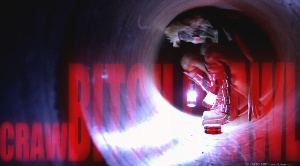 If you thought Crawl Bitch Crawl‘s teaser trailer we brought you last year was compelling, and we know you did, then you’re going to pop a gasket when you see the full-length official trailer. It’s as intense as a night of grave robbing.

From what can be inferred, Crawl Bitch Crawl either takes place in the not-so-distant fucked-up dystopian future or in some parallel universe where fertile women no longer exist (except one). Given all the hormones and crappy GMOs we’re consuming, this kind of reality seems entirely plausable.

An elite security team assigned the task of protecting the last known woman who can become pregnant, find themselves caught in an endless claustrophobic underground tunnel system. The team soon learns – the real horror is not the unstoppable force chasing them, but the ever growing smaller tunnel itself.

If you ask me, and I know you didn’t, the action of the film looks to be inspired by Running Man and Alien. And that’s not a bad place to be, since both those films are amazing. In terms of plot and commentary, I’d look to The Handmaid’s Tale and Children of Men.

But, no matter where you look, this trailer has “Oh, my, god! I absofuckinglutely have to see this damn thing!”

There’s still no release date available, which is driving us up the freakin’ walls.