At any rate, writer/director Christopher Roosevelt made a zombie movie that calls the zombies “infected,” “demented,” or “victims of biological warfare.” The Demented is definitely a low-budget affair, and they really should have stayed away from the CGI; the flies buzzing around the dog were an extreme distraction from what could have been an intense and terrifying moment.

The filmmakers should have also stayed away from casting actors who look like other, more famous, actors. Case in point, Richard Kohnke is an undeniable doppelganger for Jared Padalecki – in voice and image, but only to a lesser extent. It comes off as kind of desperate.

The resident dickhead of the film, Howard (Michael Welch, Twilight franchise), who is another clone-type actor (namely Shawn Ashmore, Smallville, The Day), was a bit of an exaggeration and reminded me of a poor emulation of James Spader’s rich-guy-asshole performance in Pretty in Pink. However, these types of films need this character archetype – so we can cheer like ravenous psychopaths.

I might be reading too much into what the underlying message could be in The Demented, which on its surface is entertaining, but a take-it-or-leave-it film. Given the catalyst for the horror, a biological attack, my suspicions are that this movie is a political commentary. When the attack hits and the local population becomes “demented,” they are in fact becoming invaders occupying a region. The group of friends we have are the territory’s civilians operating under a democratic system (they take votes about whether they should stay or go).

From the start, the democratic system doesn’t work since one representative refuses to vote. We know that the vote would have resulted in a tie if she had cast her ballot, but since she didn’t, the group stays – and this proves fatal. The group faces outside forces and internal betrayal, which includes assassination.

So, the question becomes: Is the fatal outcome of their decision a comment on the failures of the democratic system?

As I said above, The Demented is a take-it-or-leave-it film; missing it isn’t going to affect your zombie knowledge. However, if you watch the film as a political commentary, there might be bountiful rewards. 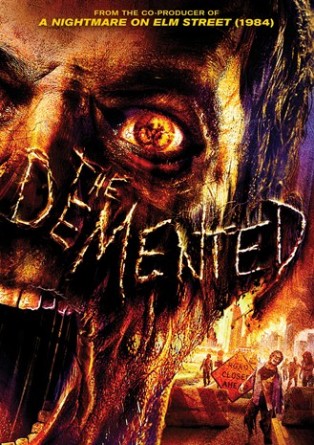