Shai Hulud Interview – Matt Fox Had Us At “Lifelong Metalhead” 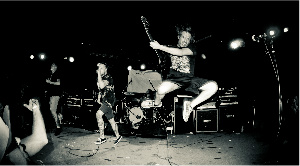 Shai Hulud is one of the most underrated hardcore punk bands. Getting their start in Florida in 1995, and releasing their debut album, Hearts Once Nourished with Hope and Compassion, in 1997, the band has never gained mainstream favor.

The lack of public attention could be attributed to a couple different factors, such as a virtual revolving door of band members (Matt Fox being the only consistent mainstay) or lyrics that have more gravitas than simply “I hate this because of you” or “I’m sad because the world hates me.” Shai Hulud does have, however, major underground cred, influencing countless bands: 7 Angels 7 Plagues, Alove for Enemies, As Hope Dies, As I Lay Dying, Behind Crimson Eyes, It Prevails, Many Men Have Tried, Misery Signals, Mychildren Mybride, Poison the Well, See You Next Tuesday, Silverstein, The Funeral Pyre, The Banner, Unearth, and more have named Shai Hulud as an influence.

We saw Shai Hulud perform to a small but incredibly intense crowd at Amnesia Rockfest last June. Although the band’s latest studio album, Reach Beyond the Sun, features former lead vocalist and New Found Glory guitarist, Chad Gilbert, he’s not the touring vocalist. Chris is – and his intensity is infectious. Clubs yes, but at a big outdoor venue it’s rare to see anyone from a band jump off the stage and engage with the audience over the barricade.

We also sat down with Shai Hulud’s founding member, Matt Fox, for an intimate interview. He’s truly a sincere guy and he had us at, “I’m a lifelong metalhead.” In the interview clip you’ll see Matt nursing his pasty white leg, but sympathize with the guy for a moment; he sprained his ankle while jumping around on the stage just before we sat down with him.