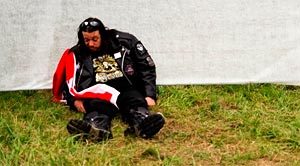 The perfect festival facade is starting to wear, the stress marks becoming apparent. The lack of urinals (or at least functioning ones) means every fence, bush, and tree has become a massive yellow puddle of stinking piss. But it’s OK, the ground just has to endure one more day and night of yellow rain before it’s all over.

For a day with, yet again, over 50 bands on the bill, Sunday actually felt a bit light. The crowd must have halved and gone were the huge rock gods of earlier days. I can’t say I wasn’t relieved though; Saturday was just a few too many people for comfort.

The darker day of Hellfest

It seemed to be a much darker themed day, and seemed to be aimed a lot at a gothic and black metal audience. There was Moonspell, Cradle of Filth, Marduk, Dark Funeral, and Ihsahn among other smaller acts.

There was also Stone Sour, which (like Korn and others from the previous nights) seemed completely at odds with the more traditional rock and metal at the festival. Perhaps a purposeful juxtaposition, and there certainly were a lot of people there for them.

The good news about these festivals is there is so much for everyone, and if you don’t like it, don’t watch it. It was interesting to see Newsted make his way so squarely and prominently onto the main stage of such a big show, after little more than a 4 track EP earlier this year, but that’s the publicity power of being formally associated with an industry giant like Metallica I suppose. He joined former band mates and thrash metal veterans Voivod on stage directly after.

The day marked Danzig‘s 57th birthday, and saw him in absolutely fine form, with a half-half Danzig and Misfits set that saw him joined by his old band mate, Doyle. There was another weird last-minute stage change here, with Ghost and Danzig switching stages, no doubt confusing many more people in what was really beginning to appear as quite a clusterfuck of set planning. According to Danzig this was just a matter of getting to their next gig the following day. I’ll give them the benefit of the doubt in this case.

Did you see that spectre?

Ghost wrapped up the night with their blend of catchy occult theatrical doom metal. It was an impressive stage show, great sounding, and made it easy to see why this relatively new Swedish group has had such a rapid growth in fanbase and rise up the running orders of festivals like this. It’s brilliant marketing from Papa Emeritus II and his Nameless Ghouls. It wasn’t as dynamic as some of the older face-painted shock bands of old, certainly no KISS, no Alice Cooper, or King Diamond, but these are still early days for the group.

The “metal pot” of Europe

There’re a lot of things I liked about Hellfest besides the music. I liked the surprisingly good range of food at fairly reasonable prices. I LOVED the metal market; the massive, well-organised tent packed with everything a metalhead could desire. I love that it’s situated so close to an enormous supermarket/superstore and discount supermarket. It’s great for the campers needing booze and other supplies. I just like that there’s not too much capitalizing going on, unlike some of the other big rock and metal festivals Europe hosts (*cough* Sweden-Rock *cough*).

Hellfest doesn’t quite have the soul of the smaller more dedicated festivals, but considering its size, it does a fine job, and nowhere else are you going to find these names all together like this. The crowd is great, friendly, and multicultural. French, German, Irish, British, Spanish, Portuguese, and many others all make a strong showing here. The nights become a great mix of people united by metal. I walked away a happy man, met many great people, and saw many great bands. You can’t ask for more really.