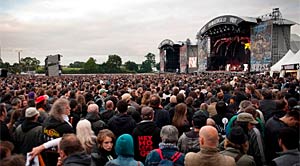 Hellfests forecasts weren’t good, the weather had more or less held out, but on Saturday the rain literally dampened my mood. The grounds were a slippery, muddy mess by now and any of that nice green grass had been replaced by this muck. But that’s OK, a metal festival is messy business at the best of times.

Today was KISS, and boy could you tell. From the moment you got into the festival the crowds were overwhelming. I think it just may have hit at tipping point that the grounds were not quite cut out to handle. Even from early on the main stages were almost impossible to get near, and the side-by-side setup meant there was no let up in the crowd. I think the KISS fans got in at the start and never left, and by the evening you could hardly move anywhere.

This day was definitely the festival’s pinnacle, for better or worse. Saturday was the day for almost everyone. There was a lot of classic hard rock on main stage 1, a lot of nu metal and most of those genres that end in core on main stage 2, and a lot of doom, black metal, power metal, folk metal, and punk under the tents. There was just a lot going on period.

Procession blew me away, a real treat from an up-and-comer. Krokus kicked out their classic rock and metal, opening with “Long Stick Goes Boom”; the classic Krokus track that sounds more like AC/DC than AC/DC themselves and continued to stick firmly to its catchy dad-rock tracks, though they did speed up for a bit with classics like “Headhunter.” Accept impressed with a near 50/50 mix of old and new. Most old bands would be burned at the stake for doing such a thing, but the latest two albums with vocalist Mark Tornillo have been exceptionally well received. I couldn’t help but feel good watching ZZ Top; there’s something charming about these old dudes’ delivery. Great stuff.

Candlemass were surprisingly good too. They’ve had a fairly rocky time being accepted by fans with Solitude Aeturnus singer Rob Lowe, particularly incompatible with the band’s previous singers Messiah or Johan Längqvist. They have a new singer now, Mats Levén, and while he’s not the same as those guys, he still delivers. The band as a whole felt great to see, full of energy and very, very heavy.

KISS delivered the highly rehearsed, huge performance everyone expected of them. They have always been an amazing band to see live, and they still are, but they’ve lost a bit of their spark in the last few years. There was some unnecessary butchering of Ace Frehley and Peter Criss songs by their replacements Tommy Thayer and Eric singer, actually changing the riffs and lines of the songs. There was also, understandably, some emphasis on their latest records, which might have been better if not for the fact that this completely forgettable stuff is replacing classic material in their sets.

Paul Stanley looks like he’s not quite up to his full game anymore either; whatever he could get away with palming off for the crowd to sing, he did. It was definitely audience interaction, but I think it was also a cover for a voice that’s finally loosing some of that momentum he’s held onto for so long. But, hey, they’ve been going for 40 years and they’ll still blow away anyone who’s not seen them before.

Unfortunately there was a lot of timetable changes on Saturday. It was quite frustrating as there were no official handouts giving accurate times. The booklet from the info tent was almost useless, the handout after the entrance was slightly more accurate but still very wrong at times. Updates from the Hellfest app weren’t always correct, either. It would have been nice if they had just printed out some crummy A4 sheets with the latest changes on them. Something. It’s a huge event and they can’t get everything right, though, and they did get a lot right.