Lamb Of God At Amnesia Rockfest 2013 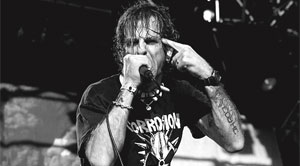 Lamb Of God At Amnesia Rockfest 2013

Lamb of God played to a full and energetic crowd at Day 2 of Amnesia Rockfest, 2013. If you’d consider the scene for a moment, it was ripe for a riot or a violently good time: we’d just entered dusk, a sea of drunken, hot, and frustrated fans packed the venue with less than an inch to move, aggressive music played by a band newly reunited after a troubled year of legal problems – yeah, things could have exploded into a scene of chaos.

But it didn’t. Things remained relatively civil, and a lot of that probably had to do with Randy Blythe’s recent history (he was charged and acquitted of manslaughter in the Czech Republic) and his simple plea to the audience. It went something like this:

Blythe: “We recently had some legal troubles.”
Crowd: “Boooooo.”
Blythe: “I’m not going to preach, but be good to one another.”
Crowd: “Yeaaaaaaah!”

Lamb of God blasted through just eight songs (see the setlist below), and only two of which came from their latest album, Resolution. Some may have expected more, considering LOG’s promo tour for that album was interrupted. It was far from a disappointing set in terms of song selections, playing popular fan favorites from their best albums. However, the performance itself left something to be desired. Yes, the band plays aggressively and with pinpoint precision, and Randy Blythe is a crazy man on stage, owning the entire thing, but other than that, watching Lamb of God play live is akin to watching trees with guitars. Just not much madness going on.

As a fan of Lamb of God, that’s my only complaint.