Noctum Will Seduce You With Teaser Track 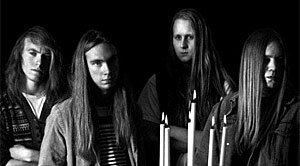 Noctum Will Seduce You With Teaser Track

Metal Blade Records will release Noctum‘s sophomore album. The album title and artwork have yet to be made known, but the Swedish retro-doom outfit have just unveiled a track from that album, “Liberty in Death,” which can be heard just below.

If you happen to be going to Mayhem Fest or Van’s Warped tour, make sure to swing by the Metal Blade booth or the Black Dahlia Murder booth, respectively, to pick up a Metal Blade sampler, which contains “Liberty in Death.”

Noctum formed in 2010, and released their debut album, The Seance, with High-Roller. By 2011 they’d signed with Metal Blade, and with a new record deal in place with a global label, Noctum spent the majority of 2012 refining their sound and writing new songs. Their search for original and interesting material led them to a heavier and darker sound. The progression came very naturally for the band and differs from the typical 70’s vibe. The new material successfully evokes a heaviness and emotion one might not expect from a “retro” sounding band.