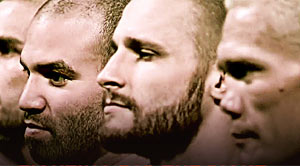 The premiere of Fight Master aired last night on Spike TV, showing the world that there is still room for another reality show about MMA on network television. Despite the gap for creativity being pretty narrow for a show like this.

The first episode was very entertaining, to say the least, but it took me a while to realize that all of the fights are cut in order to squeeze them all into an episode. I didn’t like it at first, but it makes perfect sense to do so for an hour-long segment. A total of five fights were shown, as opposed to just the two full-length fights that are featured in each episode of The Ultimate Fighter. It’s a small comprise the show needs to make that may annoy some fans, but if the fight is boring to watch overall, then at least you get to only see the highlights.

The fights felt almost identical to the ones shown in the very first elimination episode of TUF. That’s pretty much what you get, plus the winner of the fight gets to choose his coach. This is where things continue to be interesting as you start to also see which fighters the coaches want and/or don’t want. I like this part and it’s what makes the show completely different from TUF.

The upcoming episode of Fight Master will feature a fight between Mike Dubois and British counter-terrorism enforcer Rob Mills as the elimination round continues.

You can watch another sneak peek above, or catch the full fight on Wednesday at 10/9 C on Spike TV.