BBQ Massacre (Short) – What Kind Of Meat Is That? 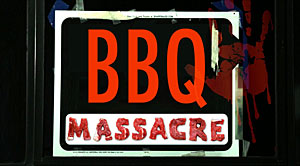 We love our short films, and we love our independent films. We also love short film challenges and contests. So, when we came across BBQ Massacre, we had to share it with you. From the demented minds of Bryan Wolford and Tony Walsh, BBQ Massacre was put together in May 2013 as part of IndieHorror.tv‘s 48 Hour Short Film Challenge.

The great thing about these types of shorts is that you can’t ask for much, but sometimes you get a surprise and sometimes they go somewhere. While some elements are underdeveloped, the idea is often there, and that’s what makes them awesome. In BBQ Massacre, we have four friends out camping with an RV, a lot of shit jokes, and an uninvited guest. I’ll leave it at that and let you watch the 8:50 minute short. I will say, however, that there’s a connection to Hannibal.