‘Sin City: A Dame To Kill For’ Release Date Pushed Way Back 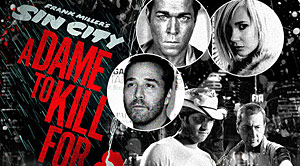 ‘Sin City: A Dame To Kill For’ Release Date Pushed Way Back

If you’re looking forward to Sin City: A Dame To Kill For this October, forget it. The release date for Robert Rodriguez’s sequel to the visually stunning Sin City has been pushed way back. Sorry to break the news to you this afternoon, but the film won’t be out in theaters until August 22, 2014. Details are limited at the moment, leaving me as confused as you.

As far as I know, it could be production issues, shooting conflicts with the huge cast of high-profile stars, or maybe a marketing issue. Honestly, anything could be the reason with a film of this caliber. At least Rodriguez’ next film, Machete Kills, is still on pace for release in September.

Like we previously said, the cast of Sin City: A Dame To Kill For is mega huge, it includes:

Look for more details to be announced shortly.