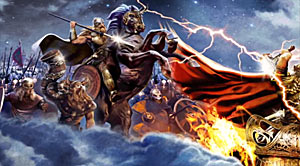 It’s coming in a week’s time. That would be Amon Amarth‘s epic ninth album, Deceiver of the Gods. After being brutally teased for the last week or so with the three-part documentary Forging Mjölnir, Amon Amarth aren’t through with their torture yet. As of today, the Vikings are now taunting us with a track-by-track teaser on YouTube (above). It’s like being a rabid dog with raw meat hanging just out of reach. (Thank god I’ve heard the album – and will listen to it when I’m finished writing this.)

At least you get a sample of what’s coming next week. Also, you benefit from a Deceiver of the Gods track-by-track explanation of each track from vocalist Johan Hegg. Enjoy those below, and don’t forget to check out Amon Amarth as the open the main stage at Rockstar Energy Drink Mayhem Fest, 2013.

1) “Deceiver of the Gods”
This is basically an introduction to Loke. He describes his background and his devious mind in these lyrics.

2) “As Loke Falls”
… is the tale of the battle between Loke and Heimdall at Raganrök, the end of the world.

3) “Father of the Wolf ”
… is the story of how the fearsome nemesis of Oden, the wolf Fenris, was born.

4) “Shapeshifter”
… is based on Loke’s quarrel with the Asa Gods, but also him describing his traits of being able to shift his appearance into different animal shapes, as well as shifting from doing good or bad deeds.

5) “Under Siege”
… tells the story of a fortress under siege, where the residents have to make a choice: either starve to death, or make one final desperate attack that is doomed to fail.

6) “Blood Eagle”
This is a nasty piece of work. Basically describing a very brutal type of execution.

7) “We Shall Destroy”
… is a story about a battle where the warriors of both sides are forming a wall of shields. It’s a story of strength through unity.

8) “Hel”
In this song Hel, the ruler for the realm of the dead welcomes the listener to her ”humble home” to join her at the banqutte of the dead where Famine is your plate and Hunger is your knife. This song features a special guest appearance by Messiah Marcolin!

9) “Coming of the Tide”
These lyrics are related to “Under Siege.” It’s the story of how a mounted legion of warriors are rushing to the aid of the besieged, but they arrive too late. Realising everyone is dead they take up the pursuit of those responsible .

10) “The Warriors of the North”
This is a story of a group of loyal warriors who are betrayed by their king, and banished from their land. But twenty years later the kingdom is under attack, and they are called back to defend the king who betrayed them, to restore their honour and to get a final chance to die the warriors death so that they can reach Valhalla.