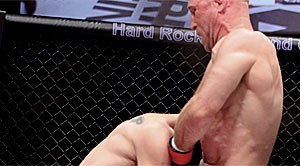 This is a short but sweet fight between Jon Fitch and Josh Burkman that you must check out. The rematch took place Friday night as the main event for the World Series of Fighting (WSOF) 3 at the Hard Rock Hotel & Casino in Las Vegas, Nevada.

Unfortunately, after being knocked down by a punch in round one, Fitch lost terribly bad in his WSOF debut due to Burkman’s guillotine choke submission. This marks the second time in Fitch’s pro MMA career that he got defeated by a submission. However, I must say, where the hell was referee Steve Mazzagatti‘s head during the fight? Jeez! That was poor timing, my man.

Glad Burkman stopped. Mazzagatti is a clueless idiot who will hurt someone and continue to ruin guys legacies. Much respect Josh

You can watch the full fight replay of Jon Fitch vs. Josh Burkman 2 right above.