iwrestledabearonce: “Late For Nothing” Details 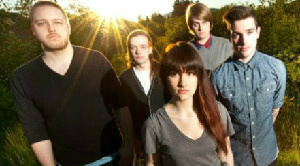 iwrestledabearonce have announced they will release their highly anticipated third studio album, Late For Nothing, on August 6th, via Century Media Records.

Late For Nothing marks Courtney LaPlante’s IWABO studio debut since joining the band on a day’s notice last summer. With some new blood on deck, fans may feel a little tepid about what’s to come. However, you can be sure that their avant-garde style is well intact on the new album; their style has progressed immensely. It’s reported to be their boldest and most accessible release to date, as well as ripping and roaring with blunt-force intensity that incorporates their brain-joggling breakdowns with a unique blend of electronics, jazzed-out time signatures, and break-neck riffage.

“The entire album came together as a result of us wanting to do something different,” affirms guitarist/programmer Steven Bradley. “We didn’t want to make another weird IWABO album or whatever people were expecting. We set out to make something different and better than anything we’ve ever released. It’s a more evolved version of the band. We explored new styles and genres as well, especially in terms of the more spacey, epic, and beautiful parts. It’s got the most melodic moments of our career as well as the heaviest.”

Featuring the forthcoming, schizophrenic first single, “Thunder Chunky,” Late For Nothing scales the summit of heavy rock/metal with 12 teeth-gnashing tracks that find a happy medium between crushing metal and beautifully orchestrated melody. The album’s opener, “Thunder Chunky,” sets the tone for the album as they slash their way through songs like “Letters To Stallone,” that showcase LaPlante’s incredible balance of full throttle screams and melodic choruses, and “Carnage Asada,” which features a guest solo from the legendary Steve Vai.

IWABO will head to Europe for a summer run before returning to support the release of Late For Nothing in the U.S. on The All Stars Tour 2013 with Every Time I Die.