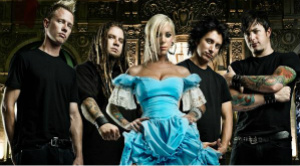 In This Moment isn’t for everybody and are often criticized for one thing or another. The band draws influence from a variety of genres, most notably is metalcore, or at least that’s what a lot of haters say. Yes, the metalcore element is present, but ITM goes beyond that genre. Most recently they’ve experimented with dubstep on Blood, but they didn’t overdo it.

OK, so dubstep isn’t exactly better than metalcore. So, I’ll say that you can definitely hear classic rock/metal in some of Chris Howorth’s guitar solos and Maria Brink delivers some of the best clean/scream vocals on the planet. The music is highly melodic, at times soft and pensive and at other times heavy and full of rage.

The performance here, Live at Deep Rock Drive, is the best we could find in terms of sound quality. It’s a live Internet performance played in front of a small select crowd of about 30 people with a large screen on which fans could send messages and make requests. In This Moment didn’t have a whole lot of material to draw from back in 2008, all the songs performed here are from their first album, Beautiful Tragedy. Lyrically, that album draws from Brink’s own experiences.