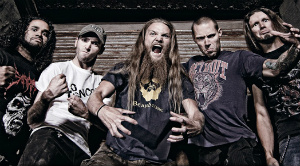 Last week, Detroit, Michigan’s Battlecross unveiled the title, cover art, and first single, “Force Fed Lies,” from their upcoming new album, War of Will. This week, Battlecross has posted the first of two studio videos. The clips were filmed entirely by the band as they were holed up at Audio Hammer Studios in Florida. In this first installment, you’re treated to raw video of session drummer Shannon Lucas (The Black Dahlia Murder, All That Remains) tracking songs for the album, as well as other candid clips from throughout their time in the studio.

War of Will releases July 9, 2013, just as the band heads out for the summer on the Rock Star Energy Drink Mayhem Festival Tour with Rob Zombie, Five Finger Death Punch, Amon Amarth, Children of Bodom, Machine Head, Behemoth, Mastodon, and more. For more Battlecross dates, check out our previous article.