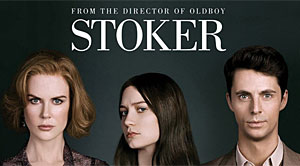 Park Chan-wook’s Stoker premiered at Sundance earlier this year, which received generally positive reviews and scored best debut in its opening weekend across five markets (L.A., NY, Boston, Chicago, and Toronto) in March. Stoker was released by Fox Searchlight, grossing that weekend $158,822 from 7 theaters is considered a respectable start for a limited release, to say the least.

Now, Stoker, an American directorial debut for Park Chan-wook (Oldboy, Thirst) is finally making its way to Blu-ray and DVD on June 18, 2013. If you haven’t seen this film yet, your chance will be here in less than three weeks. The film stars Mia Wasikowska, Matthew Goode, and Nicole Kidman.

Below are the official details, including a look at the wicked blue box art.

An Exclusive Look: A Filmmakers Journey
Deleted Scenes
Theatrical Behind the Scenes: Mysterious Characters, Designing the Look, Creating the Music

Free Song Download of “Becomes the Color” by Emily Wells