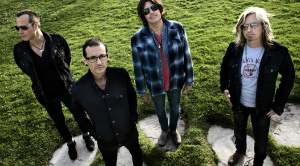 We don’t normally touch on grunge-ear stuff, but the Stone Temple Pilots were a favorite of mine back in the day. Without former lead singer, Scott Weiland, STP is nothing more than an STP cover band. It’s sad, but that’s the unfortunately truth when it comes to losing the “voice” of the band. It’s a rare thing when a band can find success with a new vocalist.

STP have recently added two new nails to their coffin: They’ve taken legal action against Weiland for doing things that violate the conditions set forth in the mutual contract between the two parties. (Basically, the parties are forbidden to do certain things.) STP has the legal right to take this action, but it’s probably not the wisest move.

The second thing they’ve done is hire Linkin Park‘s Chester Bennington as their new vocalist. This is lame, because Bennington is lame and so is Linkin Park.

Below you’ll find the official STP statement as they try to defend their actions. The crux of it is that STP wanted to do a 20th anniversary tour playing the first album in its entirety. Unbeknownst to them, Weiland had already started promoting the same thing as a solo artist. If you ask me, STP knows that with Bennington they cannot compete with Weiland. Weiland is the voice of STP, always has been, always will be. Personally, I’d got see Weiland as a solo artist playing Corelinkin over STP with Bennington playing Core any day.

“You may have read we recently filed suit against our former singer, Scott Weiland. We wanted to clarify a few things:

Our purpose in taking this action is not to hurt Scott. We want to move forward productively, and Scott’s choices and actions have prevented us from doing that. We were in the process of putting our 20th anniversary tour together to celebrate the release of our first album, Core. The plan was for a big tour where we’d perform the album in its entirety, along with some other favorite STP songs. So, you might imagine our shock and disappointment when, without any notice, we learned that Scott had seized this tour for himself as his solo tour, and decided to do exactly what we as a group had planned. We found out about it the same way you did—we saw an ad for it.

Without getting into legal details, the band has a binding agreement that clearly states what each of us can and cannot do outside of STP. Unfortunately many of the decisions Scott made violate this agreement, have been harmful to the band, and prevented us from moving forward. When our requests to Scott and his representatives that they abide by the agreement were ignored, we finally had enough. So now, we’ve made our choice. It was beyond time we made some new music, which was impossible in the dysfunctional environment we were in. We’ve lived in it long enough and have decided to move forward with STP. We wish Scott well. We’re really excited about the new music we’ve been making with Chester, including the song we just released, “Out of Time.”

We love this band and respect everything it means to you. We want to always give you our best and the choice we made is completely in that spirit.
Dean, Eric & Robert