MMA: Josh Barnett To Clash With Frank Mir At UFC 164 In Milwaukee 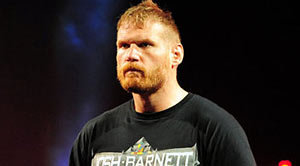 It isn’t a surprise that Milwaukee, Wisconsin, is finally going to be a destination for a UFC event, considering it’s the home of Harley Davidson, a longtime sponsor of the sport. At this point, it’s safe to say that HD is more like a partner than a sponsor of the Zuffa-owned banner. Plus, UFC 164 coincides with the 110th anniversary of Harley Davidson motorcycles.

So, to put former UFC Heavyweight Champion Frank Mir against Josh Barnett on the main card for UFC 164 is a brilliant idea since both men have a relationship with bikes: Mir is known to ride and Barnett collided with a motorcycle at one point in his life. Put two and two together, and it makes perfect sense for me to have these heavyweights clash at UFC 164. Hey, it’s not much, but it’s a coincidence nonetheless.

The announcement officially came in from the UFC, and Barnett also confirmed via Twitter yesterday.