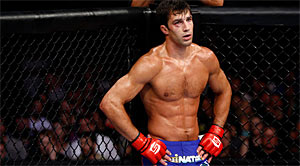 Luke Rockhold made his UFC debut on FX two weeks ago, and lost to the same man that destroyed Michael Bisping with a devestating head kick via the second round. Vitor Belfort is that man, and he finished both fighters in similar fashion, earning the UFC veteran Knockout of the Night bonus both times.

However, Bisping regained a bit of momentum after his recent win against Alan Belcher at UFC 159, but still needs a few more worthy challenges to secure the No.1 contender spot in the division. An opponent worthy enough to get him to that spot faster could be Rockhold since he has already proven himself in STRIKEFORCE after winning the middleweight championship and defending it twice. Plus Rockhold is still listed in the top 10 best within the UFC middleweight division, even with a recent loss to Belfort.

Rockhold already put two and two together because he is hungry to return to the Octagon again. So he called out Bisping via Twitter yesterday.

No word yet if Bisping accepted the challenge, but I’m sure Dana White and Joe Silva are paying attention here since many feel this fight makes perfect sense at the moment. Just take a quick look at the Twitter replies and you’ll see what I mean.