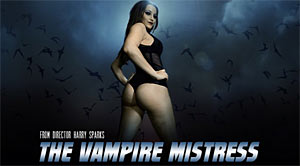 Judging from the trailer, The Vampire Mistress has everything it needs to be a campy horror flick: bad acting, requisite boobs, blood, and a simple plot.

“The Vampire Mistress tells the story of a beautiful young reporter named Laura who’s life changes dramatically one fateful night when she is abducted by a sinister cult called the vampire society. After she is made into a vampire, Laura must choose to either join the vampire society and the evil mistress Alison in terrorizing the city or use her new powers to bring them down and end their reign of terror once and for all.”