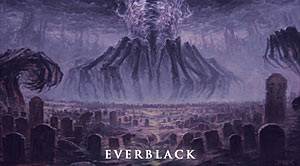 The Black Dahlia Murder will release Everblack in a few short weeks (June 11th in North America and June 7th/10th in Europe). So far, the band has released “Into the Everblack,” and starting today, “Goat of Departure” is available to stream at Loudwire.

The song’s meaning has evil roots, and equally wicked riffs and solos, but it also crosses over into something sacred to metal fans. Vocalist Trevor Strnad reveals the concept behind “Goat of Departure”:

“This song is about how the goat came to represent Christian evil and the origins of the infamous ‘horns’ metal hand sign.”

The Black Dahlia Murder are on tour all summer, so check the dates and make a date with destiny.