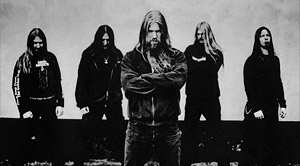 Part I of Amon Amarth’s Forging Mjölnir documentary was released today. It’s all part of the build up toward the impending release of the band’s ninth album, Deceiver of the Gods, but it’s also a testament to how much this band cares about its fans. Not many bands go to such lengths to give you an inside look at their interests and inspirations.

Forging Mjölnir was filmed and directed by Luke Daley, who used black and white video and stunning landscapes brilliantly. In Part I, we get a great deal of perspective from Johan Hegg and Ted Lundström on Norse mythology and how it affects Amon Amarth.

You can see Forging Mjölnir via the official website. You’ll have to allow a Facebook app, but you also get a Viking name (mine was Starkad) during the sign-in process.

Deceiver of the Gods will be released on June 25th in North America, June 21st in Europe, and June 24th in Japan. About the album, Hegg said:

“Every time we start working on new music we begin with the idea that we’re going to write the best album ever. We knew we wanted a more aggressive, live feeling to this record but there’s no formula behind what we do. We just try to write something that takes us a step further than the last record, and is something that will excite us and our fans. Deceiver Of The Gods is the result.”

If you want to hear the latest offering from Deceiver of the Gods, check out “Shape Shifter” at stereogum.com.

Finally, if you’re interested in seeing one of the best bands out there today, check out Amon Amarth’s summer tour schedule.