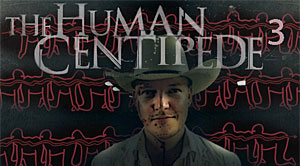 I think I smell Tom Six‘s anus around the corner because reports are saying that his third and final installment in The Human Centipede franchise will begin shooting this Friday in the Monterey Park area. The Human Centipede 3 (Final Sequence) was originally scheduled to go into production last year, but due to legal issues between Six and actor Dieter Laser from the first Human Centipede, filming was put on hold.

Now that Laser settled his differences with the director, he will be joined by Laurence R. Harvey in part III as “a villainous duo with a storyline no one will expect”, according to EW.

Additionally, Six previsouly mentioned that the film will feature a “a big American celebrity”, and that his goal to put together a 500+ person human centipede is still on.

I’m sensing the set of The Human Centipede 3 will be over flooded with shit by the time filming ends, and in a weird way I’m looking forward to it all in the film once the final version is complete.