MMA: Is Chael Sonnen Now Seeking Someone Other Than Wanderlei Silva? 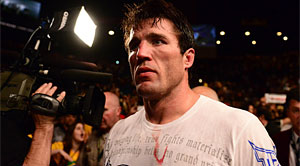 Not too long ago, UFC light heavyweight contender Chael Sonnen issued a 24-hour deadline for Wanderlei Silva to accept a challenge to step inside the Octagon with him to settle an old rivalry. Unfortunately, Silva never accepted it via Twitter and claimed that he never heard of such challenge from Sonnen.

However, once Silva got the news he responded crudely outside the deadline.

Shockingly, Sonnen fired back to his response during his desk job on UFC Tonight last week and announced that he is backing away from the fight.

“I’m not looking for it anymore, I don’t like to bully guys. I tried to fight him, he doesn’t want to fight. I’m not gonna stick a finger in a guy’s chest. If a guy says ‘no,’ I’m not gonna be a jerk about it.”

Now that his interest level in Silva seems to be gone, is he seeking a new challenger, or is he just playing another mind game with the former PRIDE Middleweight Champion? Drop your thoughts off in the comments section below.