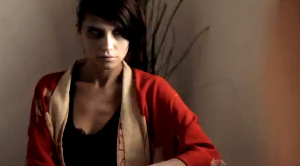 Yeah, I’m a bitch too when I don’t get my morning caffeine fix. I also see dead people… because, brother, without my coffee I’ll kill anyone who looks at me funny.

Even if the stepping on shards of glass is painfully deliberate, we’re still going to share this latest clip from Alyce Kills with you. The scene is beautifully shot, from the lighting to the cuts, and it induces a certain level of fear while creating curiosity in the viewer.

As we previously announced, Alyce Kills will be released in select theaters on May 24, 2013. It will be available on Cable VOD in partnership with Tribeca Films and for digital streaming on May 21, 2013.