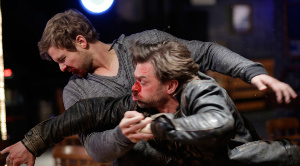 It’s fascinating to think of the power that Bates Motel is getting ready to bestow upon Norman. What else can the series be building toward? Just look at what White Pine Bay has going on and what Norman will ultimately succeed: There’s a human trafficking ring, some pot fields and the supporting industry (including the so-far unseen crime lords), a possibly corrupted sheriff, an eye-for-an-eye town mentality (which includes burning bodies at the stake in the town square), and, of course, Norma Bates.

I might be jumping the gun or getting excited, but if you consider Psycho (1960) for a moment, Norman and the Bates Motel seem to outlive the town and all of its residents. At least that’s the impression I got when Marion Crane (Janet Leigh) pulled into Fairvale, California, on a dark and stormy night.

“A Boy and his Dog” perpetuated Jake’s (Jere Burns) character as the man at the top of the food chain where the human trafficking is concerned and showed us a frayed Norma. Norma, faced with Norman’s “growing” pains and an insightful psychiatrist’s accusations, fights to maintain control. While she throws money in Jake’s face, demanding that he leave her motel, and gives the impression that she’s taking charge, she may have bitten off more than she can chew.

It would be easy to attribute the episode’s concluding seen to Jake, but that seems a bit obvious. It’s probably true, but it would be far more interesting if Sheriff Romero were responsible. Norma also pushed him this episode, to which he replied with a thinly veiled threat.

Norman, on the other hand, has a raging episode and finds focus in his new-found hobby of passion, taxidermy. Dylan, who provides Bates Motel with the required break from team Norman and Norma, learned more about the undesirable side of the industry he’s entered while also seemingly embracing it. It was also revealed here that Gil isn’t Dylan’s “big boss,” which leaves us wondering if Jake is.

In a lot of ways, Dylan’s subplot could actually serve as an interesting story for its own series. He is, afterall, much more like the rest of us.

Who do you think left the surprise for Norma, Jake or Romero?