The Welch Boys Announce New Album, Bring Back The Fight 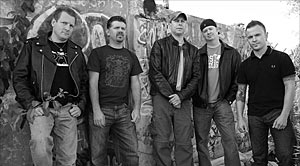 The Welch Boys Announce New Album, Bring Back The Fight

Boston’s raucous punk rockers, The Welch Boys, are teaming up again with Sailor’s Grave Records to release their third studio album, Bring Back The Fight, on June 11th. The band is inviting fellow punk rockers to stream their new song, “Belly of the Beast,” now at PunkNews.org.

The streets of Boston have always delivered some of the world’s finest punk rock music, and The Welch Boys have been at the forefront of the city’s scene for almost a decade. The band was formed from members of bands like Slapshot and The Blue Bloods and released their first album on Sailor’s Grave Records in 2004, establishing the band as one of New England’s best new punk bands. They dropped their excellent second disc Drinking Angry a few years later, and have been playing to enthusiastic crowds and developing a devoted fan base ever since.

2013 brings the release of the band’s third disc, Bring Back The Fight. Their infectious sing-alongs and hardcore influenced mayhem are still present; however, this time, the band increases the speed and anger. The new album’s thunderous rhythms are propelled by the addition of drummer Sam Jodrey, formerly of Boston’s crust punk legends Toxic Narcotic. Producer Benny Grotto (Aerosmith, Gang Green, Slapshot) applies his masterful skills to achieve a sound that is raw and explosive.

Featuring 14 fist-pumping punk rock anthems, Bring Back The Fight does not let up until the very last notes. With songs like “Belly of the Beast,” a track based on guitarist TJ Welch’s run-in with the Marblehead Police, “I Feel Like Drinkin’,” a boisterous party track that’ll have pints hoisted in the air and the hard-hitting “Hand Grenade,” which New England’s own notorious mixed martial arts legend Marcus Davis uses as his official entrance song for his fights, Bring Back The Fight further cements The Welch Boys’ place as one of the staples in New England’s punk scene.

Lyrically, The Welch Boys sing from the heart in working man’s prose. Front man Ed Lalli growls about pain and joy, addiction and freedom, vengeance and forgiveness, failure and triumph. Guitar leads soar, bass lines rumble, and when the chorus hits, it is hard to resist singing along with the boys. Amid all the madness and anger, there is an underlying thread of hope and resilience. The Welch Boys have distilled a powerful shot from their environment. The music is rough and crude, just like the streets of Boston.

“The band is pleased to be working with our friends at Sailor’s Grave records again for our latest release, Bring Back The Fight, says guitarist TJ Welch. “Andy and Duane at SGR have supported our band since the beginning. They are like brothers. Their organization is a perfect fit for this band. We have a mutual love of punk rock music. We are fortunate to be among their roster of the finest punk bands in the world. They are a great group of guys, easy to work with, and very supportive. We feel that our new album represents our best effort yet. Sailor’s Grave Records has always cultivated great music from Boston, and Bring Back The Fight is probably the best record we’ve ever made.”