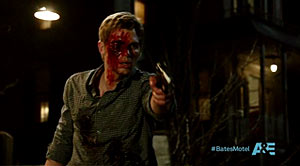 After a couple of dryer episodes, Bates Motel‘s aptly titled “The Truth” episode finally offered some edge-of-your-seat suspense, and a mind-boggling revelation.

Norma had her eyelids peeled back as the reality of Shelby’s secret life came to the front. Despite the Asian girl identifying Shelby as her captor in a newspaper photo, it wasn’t until Norma saw Shelby’s reaction when confronted with the Asian girl that she truly believed it. And although Shelby went after the Asian girl in the woods, we didn’t see anything, so we might want to be careful in assuming her death.

Prior to Shelby’s arrival at the motel, Norma went off the deep end and in a blind panic was desperate to leave the premises to question Shelby himself. Surprisingly, Norman was the one level headed enough to calm her down. Then Emma, the one who’s smart enough to crack this sex slave ring and smart enough to want to go to the police, is so easily persuaded by the Bates to “wait” to report the events with some pretty loose arguments.

Norma and Dylan appear to be getting closer, that is until she learns of his intention to have Norman move in with him. As focused as Norma can be on someone or something that betrays her, we’ll see if she can forgive him, even after he rescued them from Shelby. That’s two for Dylan.

Norma also reveals to Dylan what I’ve suspected for a few episodes now: Norman was the one who actually killed his father. Though I believe that this is true, it doesn’t surprise me that Norma portrays herself as the protective and loving mother as she relates this story to Dylan. It also seems odd that the Norma we know is such a contrast to the submissive, white-trash wife we saw in the flashback scenes. Also, given Norma’s ability to manipulate, it seems unlikely that she would submit to a brutish and abusive husband. I bet, knowing Norman’s blackout reaction whenever someone threatened her, that she set the trap to trigger Norman by instigating a violent reaction from her husband.

If you were hoping for more of this sex slave storyline, don’t worry, executive producer Carlton Cuse assures us that Shelby was just an introduction:

“It turns out that Shelby is not the last piece of the puzzle. There’s someone else who was involved in the whole sex slavery [ring]. That guy arrives in town kind of trying to figure out what the hell happened to his operation and that becomes really the narrative motor for the last four episodes. This guy’s a really, really interesting character, and what he’s up to and what he says that he wants is very unclear.”

I’d bet that it was Gil, Dylan’s boss, but I think a safer bet would be the boss of the guy who killed Ethan (and Dylan subsequently ran down with the truck). It could also be Sheriff Romero, but he seems wound a little tight for such crime.

Things are heating up around the Bates Motel; let’s hope the heat keeps coming.