UFC 159: Nick Catone Out Of Fight Tonight Due To Dehydration 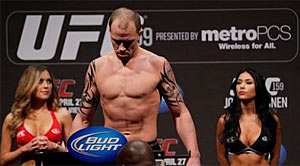 If you watched yesterday’s weigh-ins for UFC 159: Jones vs. Sonnen then you most likely noticed that one fighter didn’t make the official UFC weight limit. That was UFC welterweight Nick Catone, who missed weight by over 3 pounds and lost 20% of his purse. Today, it’s reported by a number of media sources that Catone has been hospitalized due to dehydration.

Nick Catone had to go the hospital with dehydration. His fight with James Head has been cancelled for tonight's #UFC159 card.

Unfortunetly, James Head will need to sit this one out tonight, but will still receive his show money. It’s a tough break for both fighters, and hope to see them back in the Octagon in the very near future.

Hey guys, I'm sorry to inform you that the @ufc let me know I'm not fighting tonight because (cont) http://t.co/KoT5ioUVeH