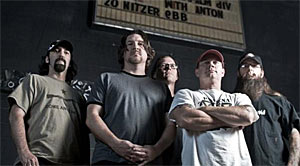 Pasadena Napalm Division, the Houston-based thrash metal outfit that features D.R.I. singer Kurt Brecht and members of Dead Horse, have just premiered “100 Beers With A Zombie” via Noisecreep. I couldn’t find the player there, so I tracked down the song on YouTube for you. Yeah, I know I’m awesome.

If you like thrash metal with hardcore elements and a sense of humor, then I’m sure you’re gonna love this. The music is tight and fun. Pasadena Napalm Division’s 13-song self-titled debut is set for a May 28th release via Minus Head Records. The album was recorded at the Music Lab in Austin and features guest vocals from Tony Foresta (Municipal Waste) and Argo (Dead Horse).