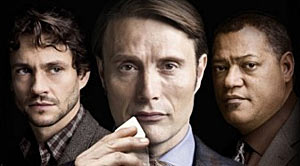 As a sign of respect toward the victims and families affected during the Boston Marathon bombing last week, NBC has decided to pull Episode 4 of Hannibal, entitled “Ceuf,” from the network. Apparently, the episode features an aspect of violence toward children, and considering the recent circumstances, NBC has skipped this episode and will jump right onto Episode 5 this Thursday.

It’s a necessary move for the network, however, it has made Episode 4 available online today. Just keep in mind that it isn’t the full episode yet, but only select scenes from “Ceuf” just to bridge the gap with Episode 5.

Watch it now, if you wish to.

A string of family murders takes place and Will (Hugh Dancy) determines they were conducted by each of the families’ missing children, who were abducted and brainwashed into killing their old families for their sinister “new family.” Against Alana’s (Caroline Dhavernas) recommendation, Hannibal (Mads Mikkelson) checks Abigail (Kacey Rohl) out of the hospital for some frightening psychiatric practices that ultimately align her loyalty with him. Molly Shannon and Gina Torres guest star