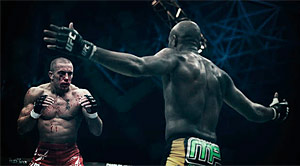 Johny Hendricks may think he has a sure shot with UFC welterweight champion Georges St-Pierre this year, but according to UFC president Dana White, Anderson Silva may be next in line. During Thursday’s UFC on FOX 7 media day, White announced that he will be calling up GSP soon to determine the next fight for him inside the Octagon.

“Maybe he wants to fight Anderson if Anderson wins. If Georges says to me, ‘I want to fight Anderson Silva,’ you think I’m going to go, ‘No you’re not – you’re fighting Johny Hendricks. We’ll talk about that later’? He’d still be [welterweight champion]. He could go [back] down to fight Hendricks for the title.”

It’s kind of obvious that the UFC president is a huge fan of this fight, maybe even more so over a matchup between Anderson Silva and Jon Jones. However, Hendricks is getting tired of this fight speculation and wants GSP to vacate the belt if Silva superfight happens. It’s a frustrating situation for Hendricks since GSP already said that he is next at the post-fight presser for UFC 158, but if White convinces GSP to take the superfight, then Hendricks is stuck again in another waiting game.

I have a strong feeling GSP’s next fight will be officially announced very soon, and we’ll keep you updated here on Yell! Magazine, so stay tuned!