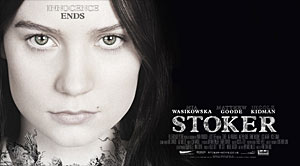 For those of you who missed the limited theatrical run of Park Chan-Wook’s first American film Stoker starring Mia Wasikowska, Nicole Kidman, and Matthew Goode will be happy to hear that the film is coming to Blu-ray and DVD on June 18th via 20th Century Fox.

The suggested list price for the Stoker Blu-ray is $39.99, and will have a few bonus features on the disc worthy of the asking price. Check them out below if you’re having any thoughts on purchasing this fantastic psychological thriller directed by the mastermind of Oldboy.

After India’s (Mia Wasikowska) father dies in an auto accident, her Uncle Charlie (Matthew Goode), who she never knew existed, comes to live with her and her emotionally unstable mother (Nicole Kidman). Soon after his arrival, she comes to suspect this mysterious, charming man has ulterior motives, but instead of feeling outrage or horror, this friendless girl becomes increasingly infatuated with him.